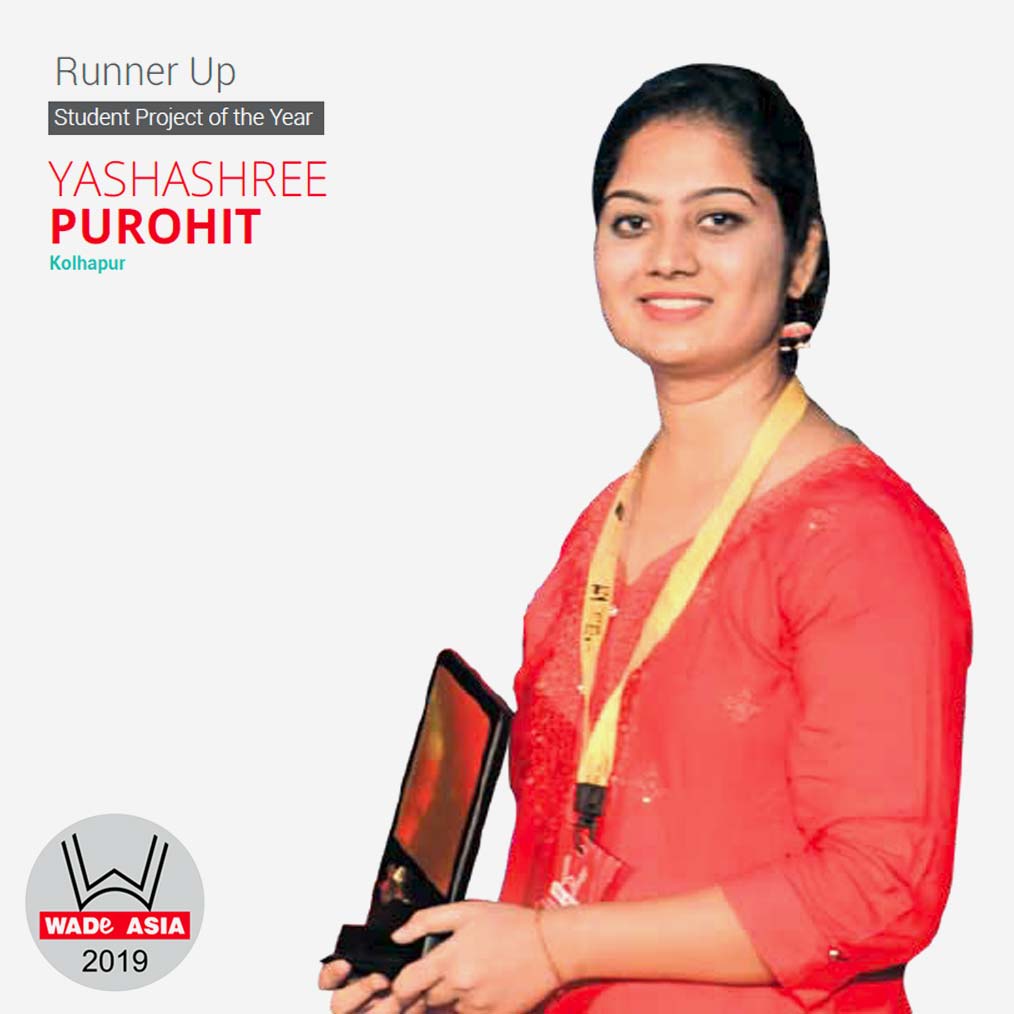 Student Project of the Year

Yashashree Purohit – a promising student graduated from D. Y. Patil College of Engineering & Technology, Dept. of Architecture, Kolhapur in the year 2019. Following a keen interest in Charles Correa Architecture, she has been studying and visiting his works since my second year of architecture. Later, this interest turned into choosing my undergraduate thesis – “In Search of the UNKNOWN – A memorial – study retreat centre of Ar Charles Correa” (which bagged the WADe Student Project award 2019 ) as a tribute to Ar Charles Correa. She believes in Sustainable architecture. For her, simplicity & quality of architecture matters more than just following the
trend.

As a woman, what do you like the best about WADE ASIA?

Interacting with the community makes us – RE-unite – RE-develop – RE- joice and RE- discover ourselves.

Could WADE ASIA help you in any way?

I have a beautiful connection with WADE ASIA. I got to know WADE platform in 2017 where I won Student project. It not only boosted my self confidence but also inspired to work more. In the same event I met Ar Sheila Sriprakash whose ideologies inspired me and little did I know I was going to work with her in near future!

Now, working with her inspires me to excel in my profession. For this very year, 2019, I could see the same lady cheering for me on receiving the award. This is the best thing happened to me in WADE.

Cheers WADE! I got a great mentor 🙂

How was your time at the event?

It gives the sense of joy to interact with creative people around WADE ASIA. It’s all about sharing thoughts and get inspired by the stories.

“I met my mentor at WADE ASIA!”

As a WADE Woman & WADE Winner, how would you contribute towards the cause & other fellow professionals or the sector in general?

Being a WADE winner I would like to share my experience, build the knowledge and inspire the budding architects, especially those who are going through tough days of architecture schooling.

Your opinion on WADE ASIA and its objectives.

It is a great initiative by Vertica and her team to unite the Women led Design, Art and Engineering fraternity.

Any suggestions for WADE ASIA?

Keep spreading smiles and the positivity in WOMEN LED DEVELOPMENTS.